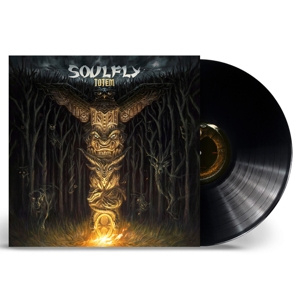 Underground icon, extreme metal trailblazer, third world warrior, and leader of a diverse and dedicated tribe, Max Cavalera not only survives but thrives, blasting out riff after killer riff. The same voice, body, and spirit which launched Soulfly in 1997 summons impossibly heavy noise to this day, throwing down ten slabs of monstrous music on Soulfly’s twelfth album, 2022’s Totem.

Produced by Max alongside Arthur Rizk, whom Revolver described as “the secret weapon behind Power Trip, Code Orange, and Cavalera Conspiracy,” Totem attacks without apology. It brims with the blackened-thrash and death metal bite of modern Soulfly classics like Ritual (2018) and Archangel (2015), with nods to the heavy groove of Primitive (2000) and Prophecy (2004).

Among the most prolific musicians in the genre’s history, Max led Sepultura from Brazil to the world stage, making fans out of Ozzy Osbourne, Deftones, and Dave Grohl along the way. He cofounded Nailbomb, Cavalera Conspiracy, Go Ahead And Die, and Killer Be Killed, issuing album after album to spirited acclaim from critics and fans. But no project is as singularly identified with Max as Soulfly, whose gold-selling self-titled debut arrived with unrivaled determination and spirit.

Soulfly, the moniker Max conjured, is an original portmanteau like "Lookaway” or "Straighthate.” The idea rose from one of the indigenous spiritual practices that inspire Max. "Many South American tribes believe the souls of their ancestors fly around them when they play music. They can even feel the souls of the animals sacrificed to create their instruments. It's heavy shit."

The songs on Totem originated with a back-to-basics songwriting approach inspired by Max’s son, Zyon. Soulfly’s drummer since 2012, Zyon asked Max one day to show him how Sepultura created their early classics. The elder Cavalera describes the process as putting riffs together like pieces in a puzzle, or bricks in a pyramid. “Zyon and I jammed for many weeks, creating the foundation.”

Max first envisioned Soulfly as a band with an evolving lineup, eager to “shake the tree” with an infusion of new creative blood from time to time. Many amazing players and guest musicians appear throughout the discography. Totem is the band’s fourth album with Zyon and second with bassist Mike Leon. It’s also the first Soulfly album without guitarist Marc Rizzo since 2004.

Like every Soulfly album before it, Totem includes a dedication to God in the liner notes. And as ever, Max follows his spiritual muse into evolving and diverse territory, taking inspiration from multiple traditions and practices. Songs like “Superstition,” “Ancestors,” and the title track lean heavily into one of the album’s themes, which deals with nature as a spiritual force.

Each Soulfly album boasts an instrumental, which Max lovingly likens to a “Planet Caravan moment,” the way Black Sabbath’s classic jam created something of a mellow album oasis. Totem is no exception. “Soulfly XII” indulges Max’s love of dark ‘80s goth guitar chords and synths. “I try to get creative with all of them; either with different instruments, like the saxophone on the Ritual instrumental, or I go by vibe. This one is really influenced by The Cure and Sisters Of Mercy.”

Old school heaviness reminiscent of Sepultura’s Beneath the Remains era punctuates the environmentalist anthem “The Damage Done,” which concludes with a crushing decrease in tempo. “Scouring the Vile,” featuring a guest appearance from Obituary vocalist John Tardy, confronts cancer. “The sickening concealed behind my dying eyes / I ripped you from me.”

Roughly 25 years since the band began, essential Soulfly bangers like "Jumpdafuckup," "Back to the Primitive," "Downstroy," "Eye for an Eye,” “Ritual,” and “Dead Behind the Eyes” are celebrated live just like Cavalera classics "Roots Bloody Roots," "Refuse / Resist," "Territory," and "Dead Embryonic Cells." Bursting with hunger and energy forged by more than three decades as a heavy metal force, Totem is a suitably brutal, vibrant, extreme, and uplifting entry into the Soulfly canon.

Soulfly's savage anthems of aggression push extreme music to its bludgeoning limits while injecting it with brilliant moments of trippy nuance and dissonance. Like all innovative musical heroes, Max makes anthems for the people. Soulfly is a celebration of family and legacy. Whatever Max Cavalera hammers out on the bridges of his four-string guitars, it always sets souls free.