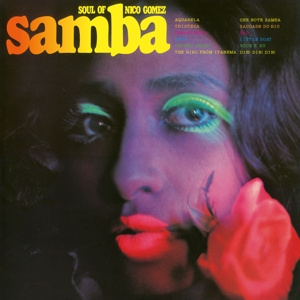 Nico Gomez, a Belgian orchestra leader of Dutch roots, has long been a favourite with Latin fans, record diggers, DJs, and collectors alike. His blend of bossanova, latin jazz, and easy listening always turns up a few choice nuggets and surprises; what is perhaps most remarkable is that it was recorded in Europe. 'Soul Of Samba' features several euro-bossa-jazz favourites such as the catchy 'Rio'; which was a firm DJ choice cut at jazz dance nights, including Brighton's 'Jazz Rooms' in the 90s. It also featured in Rainer Trüby's classic ‘Glücklich' compilation series which explored European-Brazilian-inspired music. The beguiling ‘Aquarela', with its engaging latin shuffle, entices feet to the dancefloor and is not one to miss. 'Agua’ has a lazy-quirky latin-funk feel with breathy-stoned vocals floating in the background. The album additionally features numerous breezy latin, Brazilian, and easy listening joints, some of which are ripe for sampling.