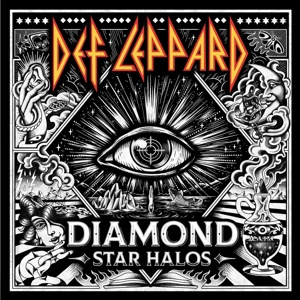 Diamond Star Halos is the brand new album from Def Leppard, their first since their chart topping self-titled Def Leppard record in 2015. Written by the band over the past two years it features 15 tracks including the anthemic, stadium-ready singles “Kick” and “Fire It Up”, with guest vocals from Alison Krauss on “This Guitar” and “Lifeless”. The album title references T. Rex’s “Bang a Gong (Get It On)” with nods to T.Rex, David Bowie and Mott The Hoople across the album, which mixes the sound of their classic spirit with modern fire. The 2LP black vinyl features a black & white cover with colour logo, packaged in a gatefold sleeve.